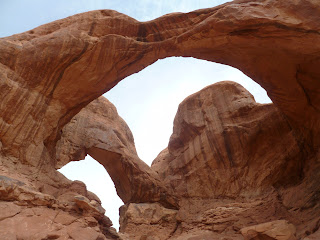 Today was another day of unexpected weather-related excitement at Arches National Park in Utah, a most wild, magical and spectacular place. But before I tell that story, it’s worth sharing a little about Friday’s long trip from Estes Park, Colorado to Moab, Utah.

We broke camp like pros, with the boys more than pulling their own weight and doing a great job of helping out with all the details. It was sad to leave RMNP, but I have vowed to return to this great park again before too long. Our road trip took us through Boulder, a city that I’d love to spend some time in, particularly because of the vibrant cycling culture. As we descended into Boulder we saw a steady stream of competitive and recreational cyclists heading north, and we passed many large and accommodating shoulders and bike lanes. Vail was similarly nuts about cycling—it seems like Colorado is THE place to be if you’re really into cycling.

Shortly after Boulder we picked up I-70, and this highway had me a little stressed. Boulder is around 5200’ in elevation, and the busy artery took us through Colorado’s ski country and up to over 11K’ in short order. Our van is no slouch in the power department, but its’ 6 cylinder engine was straining from the weight and wind resistance caused by the four bikes on the roof. The engine sure was revving pretty high, and it was by no means a relaxing drive. The terrain was dynamic and ever-changing, particularly after our excellent lunch break in Vail. We descended back down to under 5,000’ and into very desert-like terrain, crossing the Colorado River and seeing lots of red rock and rafts on the fast-flowing river.

We finally arrived in Moab around dinnertime, and the approach to this alien landscape was nothing short of magical. Dark storm clouds were on the horizon and we saw huge bolts of lightning, a foreshadowing of our experience today. After another restaurant meal at a perfectly passable Mexican restaurant in somewhat trippy Moab, we drove on the only road in Arches Park to the very end and the highest point (5200’) where our campground was located. I’d be hard-pressed to do justice to this incredible landscape, so I’ll just let the pictures tell the story.

It rained on Friday night, which was helpful, since it cooled down dramatically. We were quite pleased with nighttime temperatures in the low 60s, and we did a good job of getting an early start, heading out before 8 am to explore the more accessible stone landmarks including Delicate Arch and Windows. The boys quickly got excited about the rock scrambling, and soon they were challenging themselves with some pretty impressive bouldering, as they scrambled up the steepest section of some of the big arches.

After a picnic and a lengthy visit to the Visitor’s Center, we headed back to camp, noticing the dramatic dark rain clouds on the horizon. When we got out of the van, we suddenly became aware of the high winds, then were all shocked to see our tent about to launch like a hot air balloon! It had become untethered from two of the stakes, and we all grabbed a corner of the tent, thinking that we could just bring it back to earth and stake it back in again. It started raining, and a ranger drove by to tell us about the flash floods on the way and urged us to quickly take the tent down and seek shelter. We had no time to take the pads, sleeping bags and other miscellaneous items out of the tent, so we all scrambled, removing the tent poles and frantically shoving the tent and its contents into the back of the van. This was no easy task, since there really isn’t much room left in the trunk, but we somehow managed to shove it all in and watch the howling wind and rain while sitting in a shaking and rocking van.

After over an hour of waiting for the wind and rain to subside, we finally decided that it was safe to set up the tent again. Fortunately we arrived when we did, since the tent was mostly dry, we didn’t lose anything, and we were able to get the tent back up without too much drama. We took a quick tour of the campground and discovered that others weren’t as lucky. We spotted at least six or seven flattened tents with stuff strewn all around. I’m really proud of how the boys really helped out throughout—we’re really becoming a good team.

After one of our best camp meals yet, grits with veggies and white beans, I went for my only Arches bike ride. It was surprisingly challenging and most exhilarating, just under 27 miles and over 2300’ of climbing. I had a headwind heading north toward the park entrance but I also had an impressive 4 mile, 800’ descent, followed by a 500’ climb over only 1.5 miles. The wind helped out quite a bit on the return trip, but I most definitely deserved my dessert of a peppermint patty and breakfast cereal! I also clocked my fastest speed of the trip thus far, 47.5 mph. I don’t think we went that fast in the car on the park road.

We decided to shave a night off of Arches so that we can have a third night in the Tetons, so tomorrow we head out to Bryce Canyon. Before we do that, however, we will participate in the highly anticipated Fiery Furnace guided hike, which will include some good scrambling. Gail will most certainly have a lot to say about that experience.

Note: This entry was written offline, since there is no 3G service here at the campground. Hopefully we can get this entry uploaded sometime on the road tomorrow.
Posted by Armin Heurich at 12:46 PM