We woke up this morning in Toledo and, after a stop at the grocery store for lunch supplies and a couple of lattes (with extra shots of espresso), we were on the road by 7:30. We've decided that Ohio has the best rest stops--spotlessly clean, nicely designed, spacious. They get an A. Illinois, on the other hand, sported some less-clean bathrooms and cramped, dated facilities. Definitely C-.

The boys were troopers again today. It was a long drive (and we all groaned when we realized that the change from Eastern to Central time meant another hour of driving) and they were cheerful and cooperative the whole way. We made up a song about crossing the state borders, gave the minivan a name, and listened to most of The Mysterious Howling (volume 1 of The Incorrigible Children of Ashton Place series by Maryrose Wood).

The high point of the day came when I spotted a billboard for LeClaire, Iowa. Anyone who watches American Pickers on the History Channel knows that LeClaire is the location of Antique Archaeology, the shop featured in the show. Armin is a dedicated American Pickers viewer, so we were really excited when we realized that LeClaire was right en route to Iowa City. Less than half an hour after we saw the billboard, we were crossing the Mississippi and pulling into the parking lot. The shop is modest but well-curated, full of fascinating things. There was a great display of Gene Autry/ Roy Rogers memorabilia, and a terrific signed Wanda Jackson photo. The place was full of people like us, snapping photos, saying, "I saw the episode where they picked that!" 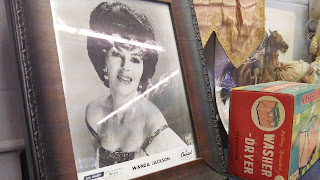 We finally hit Iowa City in the late afternoon, did some swimming, grabbed a quick dinner, and went to see the movie Brave. We all loved it, but right now poor Leo's not feeling very well. We're hoping he's just tired--he's been so proud that he's avoided any car sickness and it would be ironic if he now has a stomach bug. I'm crossing my fingers that he'll have a good night's sleep and wake up feeling good.

Tomorrow's our third long driving day. We'll wind up in Mitchell, South Dakota. I'm looking forward to showing the boys the Corn Palace. Then on Wednesday we'll have a shorter day of driving to get to the Black Hills, where we'll stay put for a few days.