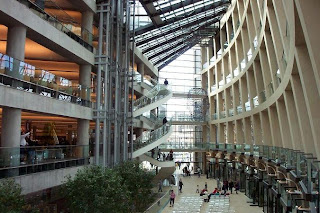 I know I already wrote a post this morning, but we've had a really nice day here in Salt Lake City. It has been focused around food, so you know I was one happy traveler. Breakfast here at the hotel was perfunctory and indifferent, so we headed out to find some lunch. I'd heard of a local grocery store chain called Harmons, which someone on Yelp! compared to Wegmans. We headed there, and it was a great place to shop and eat. We scored some terrific sourdough bread and a nice runny wedge of Brie, plus tasty cherries and raspberries. We also each had a Chobani Greek yogurt. You may know about my obsession with Greek yogurt. If not, rest assured that I consider it one of the finest breakfast/lunch/snack items to be had. I've missed it sorely, since we haven't been stocking it in our camping cooler.

Harmons is indeed Wegmans-esque in its scope and selection. We stocked up on some camping necessities, like canned tomatoes and Indian boil-in-bag meals. It was hard to resist the well-stocked chile pepper aisle and the 8 kinds of exotic sea salts. I don't think we found these kinds of options when we went cross-country in 1995. I remember it being slim pickings for foodies out here in the Midwest/West. It has been much easier to find good groceries on this trip. I'm especially impressed by the huge tortilla selection at even the smallest grocery store. The huge racks with 12 or more different types make Wegmans' selections look pretty paltry. There are all permutations of tortillas, with amaranth, blue corn, quinoa, and other grains making an appearance. Yum! 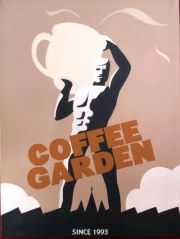 The one thing Harmons lacked was espresso. I was definitely feeling coffee deprived, since I'd had one measly cup of weak hotel coffee for breakfast. You know what happens when I feel coffee deprived, don't you? Not pretty. Armin whisked us away to a hipster coffee place called Coffee Garden, which had super-excellent espresso. After a skim latte with a quad shot, my fangs and talons retracted and the boys came out of hiding. We took in a spiffy bike shop and headed to library geek heaven.

Yup, I'm talking about the Salt Lake City Public Library. Gorgeous. Impressive. Majestic. Hip. I can't say enough good things about it. I also don't have pictures because only had Toby's camera and forgot the cable for it. Let me just say, though, that the SLCPL has a roof garden, complete with honeybee hives, a soaring atrium with shops and a coffee place, an art gallery, and a super-cool youth services area on the bottom floor. It has a Crystal Cave room with lots of reading nooks as well as a room that's designed to look like a treehouse. There are comfy chairs all over and a ceiling made of fabric sails--it looks like they retract to let in more light when needed. If you are ever in SLC, you MUST go to the library! 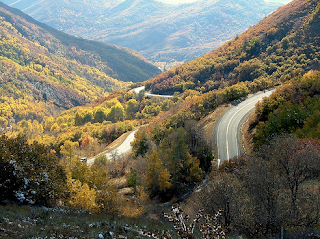 Then we tooled around a bit. Armin took us up the Emigration Canyon road where he did his morning ride--very pretty! And then, of course, we were hungry again. It was early, but we wanted to get to the Red Iguana before it got crowded. It was the best Mexican food we've ever had. I had Vegetarian Killer Nachos and they were very good, especially the guacamole. We also got a sweet fried plantain, dusted with cinnamon. Heavenly. 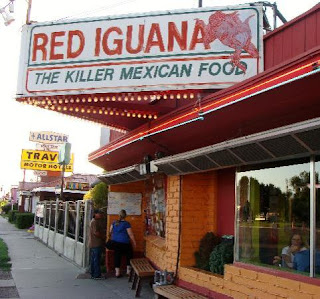 We've changed our plans for the next leg of the trip. Instead of spending the next 2 nights in the Wasatch National Forest, we're going to press on to the Tetons and get a camping spot at Colter Bay. That's a big campground in the Tetons National Park and sounds perfect for the boys--there's kayaking, swimming, lots of ranger-led programs, and (for me!) showers. We've figured out that things go best when we can stay in one place for more than a few days, so we'll be there for 5 or 6 nights. Then we move up the road a few miles to Yellowstone for a few more days. Sounds perfect to me!
Posted by Gail Brisson at 6:18 PM